As of March 16, 2021, the COVID-19 pandemic has tragically killed 2.67 million and sickened 121 million more. And while there are signs of hope—roughly 2.8 percent of the world’s population has received at least one dose of a vaccine designed to combat the virus—this doesn’t seem sufficient for Pope Francis, head of the Roman Catholic Church and spiritual leader of its 1.2 billion followers.

Fresh off an historic visit to war-torn Iraq, Francis has given “a book-length interview,” as the official Vatican News website calls it, which has resulted in an actual book entitled God and the World to Come by journalist Domenico Agasso. Published in Italy on March 16, this transcript of the interview has not yet been released in the English language, though an excerpt is available on the Vatican’s site. [1] [2]

Answering questions framed against the backdrop of the coronavirus, Francis asserts, “Today no one can afford to rest easy. The world will never be the same again. But it is precisely within this calamity that we must grasp those signs which may prove to be the cornerstones of reconstruction. … The pandemic is an alarm signal on which humanity is forced to reflect. This time of trial can thus become a time of wise and far-sighted choices for the good of humanity, of all humanity.”

Following his train of thought, we can be assured that the pontiff is not only predicting but advocating change—foundational, lasting change. This is no mere pipe dream. In the excerpt, Francis goes on to outline several particulars on the implementation of this, in his own words, “new world order.” And in his mind, the pandemic is the perfect catalyst: “Let us all keep in mind that there is something worse than this crisis: the drama of wasting it.”

So, to Francis, what would be more tragic than this past year would be not to implement his ideal government, one that is defined “by practicing and demonstrating social cohesion.” In this way, says he, “we will be able to rise again.”

To many, this may sound like conspiracy theory, dystopian fiction, and fringe groups. But you might be surprised to learn that the Bible itself prophesies the emergence of a government that forces its jurisdiction over the entire world (Revelation 13:12). Another way of describing it would be “a new world order.”

Interestingly enough, Francis’ choice of words, “to rise again,” echoes another Scripture, in which a related government is depicted by the symbol of “a beast rising up out of the sea” (v. 1, emphasis added).

A New Kind of “Salvation”? 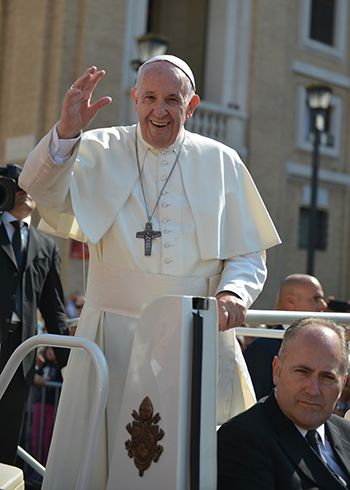 Pope FrancisSo, let’s find out more about this “new world order” that Francis has in mind. It comes as no surprise that the pontiff pontificates on climate change, one of the pillars of his administration. This is what he has to say about the subject: “We can no longer blithely accept inequalities and disruptions to the environment. The path to humanity’s salvation passes through the creation of a new model of development, which unquestionably focuses on coexistence among peoples in harmony with Creation.” Note that “the path to … salvation” is through “harmony with Creation” as opposed to harmony with the Creator, which is God.

Additionally, Francis points out that Jesus teaches that “there is no commandment more important than this one”: to “love your neighbor as yourself” (Mark 12:31). But there is an omission here. Jesus’ full declaration actually states “the first commandment” to be: “Love the LORD your God with all your heart, with all your soul, with all your mind, and with all your strength” (v. 30).

But that is not all Francis has to say about salvation: “We cannot overlook the fact that the rebirth of humanity began with a woman. Salvation was born from the Virgin Mary. That’s why there can be no salvation without woman.” So, according to these statements, our salvation involves climate change and is dependent upon women.

If he’s talking spiritually, then this pontiff has wandered far from the Bible. Christians generally acknowledge the words of Jesus found in John 14:6: “I am the way, the truth, and the life. No one comes to the Father except through Me.” Speaking of Jesus before the religious authorities of his day, Peter—the apostle whose authority every pope claims—declared, “Nor is there salvation in any other, for there is no other name under heaven given among men by which we must be saved” (Acts 4:12).

More than almost any of his 265 predecessors, Francis is taking an active role in political advocacy. The excerpt further covers the pope’s opinions on social justice, business, education, as well as his assessment on leaders around the world.

His statements about global poverty, the arms trade, and the finance industry are from both the perspective of a politician and a priest. “It is no longer tolerable”; “we can no longer pretend”; “if we cherish the future, if we desire a flourishing tomorrow, we must” (emphasis added)—this is language meant to mobilize. It tells us: Opposition to the pope’s ideology spells not only global disaster but moral degeneracy—perhaps even sin.

What will this religiopolitical rise of the papacy come to? God alone knows, and He has told us in His Word, the Bible. Find out in this free, online presentation from Pastor Doug Batchelor, “Revelation Reveals the Antichrist,” a sermon from the Prophecy Code series on the end-time role of the papacy.

Enter your email. We'll notify you of new videos that expose lies.